It is not quite right to refer to faience as a “turquoise imitation” because genuine, ancient faience is worth more than its weight in gold!

Faience, often called Egyptian faience in honor of the nation of its creation, is a quartz-based ceramic. The technology of faience ceramic making is believed to date back to 3500 B.C.  This is impressive, as glass was invented perhaps 1000 years later! 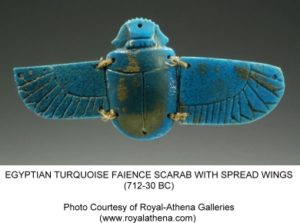 Many different kinds of faience art pieces were made over the years, including beads for jewelry-making.  By adding ground copper, malachite, blue azurite and talc, the Egyptians  were able to create beautiful blue-green shades reminiscent of turquoise.  The craft persons were also able to create pieces closely resembling another semi-precious stone, lapis.  Although faience  was less expensive than turquoise, it had great cultural value and significance to the Egyptian people.

Over the years, faience has waxed and waned in popularity.  For example, toward the end of the 1800s, faience was a reclaimed craft in Britain, France and other parts of the world, producing pieces that are today valuable antiques.  Even now, a search on Froogle reveals many faience pieces for sale, some claimed to be ancient.

There are contemporary pottery makers working in the faience tradition, but we know of no one making faience turquoise replacement pieces on a commercial scale.  It would be possible to do so.  The Bead Site, a site devoted to the scholarly study of beadwork, reports on one contemporary bead maker who was able to replicate many of the ancient Egyptian faience pieces.  In a 1998 article published in Magazine Antiques, Florence Dunn Friedman describes her team’s rather successful efforts at the Museum of Art, Rhode Island School of Design to rediscovery the ancient Egyptians’ techniques.