How Is Turquoise Formed? 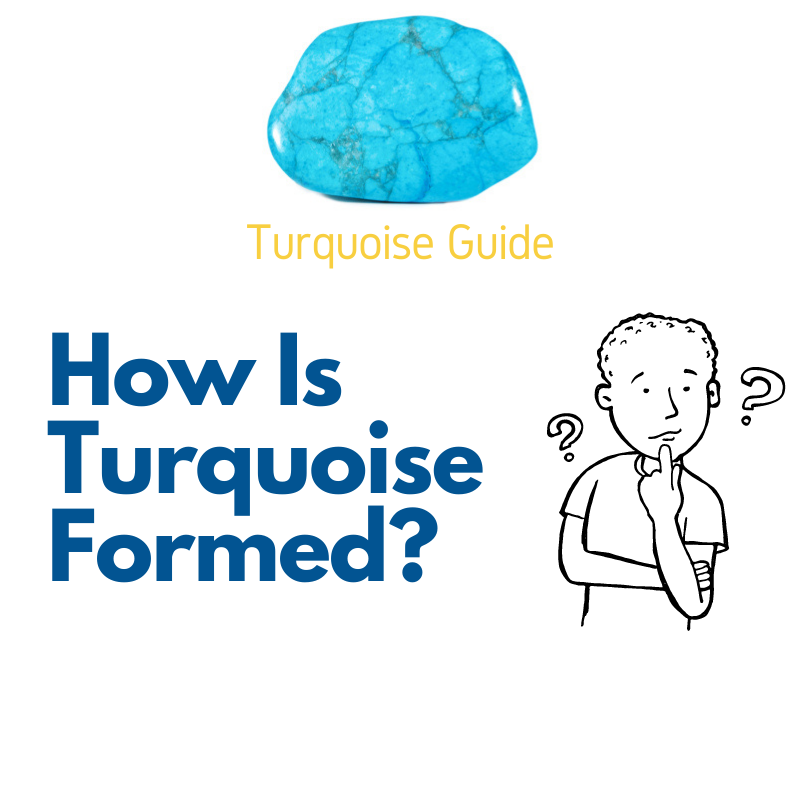 Turquoise has an opaque texture and a distinctive shade of blue to green. It is a blend of aluminum phosphate and hydrated copper with the chemical formula of CuAI6(PO4)4(OH)8.4H2O.

It is a higher-grade gemstone with substantial demand in the ornamental stone industry. However, recently the value of turquoise has degraded due to various synthetics and limitations on the market.

Turquoise is generally formed when water with minerals like aluminum or copper leak through the walls of rock. It develops in veins, which then forms a solid mass of the gemstone.

Most collectors consider turquoise as a gemstone with the highest value. Iran has the largest deposits of the most valuable turquoise, while American turquoise is well-known for its matrix pattern.

The Southwest United States now has the deposits of the most valuable turquoise in the world. Turquoise is believed to be a holy gemstone that eliminates negative energy.

The bright color of the turquoise is the symbol of self-confidence and happiness.

Turquoise properties are essential for the identification of the gemstone. However, weathering can alter physical properties to some extent.

Weathered turquoise often has the same desirable color but reduced durability and hardness. Such turquoise is hard to work with and can’t be easily cut into beads or cabochons.

Weather turquoise can be crushed to make reconstituted or composite turquoise.

The finest grade turquoise or the ones with a higher grade than window glass can reach a Mohs hardness of 6. Turquoise has a cryptocrystalline characteristic, which prohibits it from producing single crystals.

Turquoise is a mineral gemstone that has extremely variable characteristics. X-ray diffraction on its crystal system shows a triclinic analysis.

Turquoises with a reduced strength portrays a reduced particular pressure but higher porosity. The grain size of the turquoise depends on its unique characteristics.

The luster of turquoise typically ranges from waxy to sub-vitreous, while it features opaque transparency. However, in some cases, it may be semi-translucent.

The color of turquoise ranges from white to powder blue and from bluish-green to yellowish-green. Idiochromatic copper usually lends the blue color to turquoise, whereas the green shade may form due to any dehydration problems or iron impurities. You will rarely find turquoise in well-formed crystals. Turquoise is usually found as a block of microcrystals. If the microcrystals are closely knitted together, you will find a turquoise with greater durability and lower porosity.

Such types of turquoise will have a higher luster when polished. People describe such luster as sub-vitreous or waxy.

Turquoise forms well in an arid climate. Most of the high-value turquoise is developed in Mexico, southern United States, Chile, Egypt, Chile, and Iran.

Rainfall in these areas infiltrates downward through rich and soil, dissolving limited proportions of copper. When the raindrops get evaporated, these copper minerals combine with phosphorus and aluminum.

The combination of these compounds leads to the formation of turquoise. Turquoise gets deposited on subsurface fractures and can even replace the rocks that come in contact with it.

If the turquoise is able to completely replace the rock, you will get a solid chunk of turquoise. However, if the replacement is not 100% complete, the turquoise will have a matrix.

Matrix is the host rock that gets replaced during the formation. The matrix will appear as a patchy design or spider web pattern within the gemstone. Turquoise forms in multiple ways. However, the basic formation of a turquoise status with the hydrothermal deposition of a pre-existing mineral called copper sulfides.

When hydrothermal fluids are able to leech copper deposits from some host rock, turquoise is formed. Deposition of turquoise usually occurs in the potassic alteration area.

Such zones are characterized by the change of feldspar minerals to potassium feldspar.

The oxidation and weathering of pre-existing minerals allow acidic aqueous solutions to percolate. Turquoise is formed as a secondary mineral through such percolations.

Copper may come from primary copper sulfides like chalcopyrite or certain secondary carbonates such as azurite or malachite. Minerals like feldspar can provide aluminum, while appetite provides phosphorus.

The blend of aluminum, copper, and phosphorus leads to the formation of turquoise.

Arid areas usually facilitate the formation of turquoise. Turquoise is also found in —

Climatic variables play a substantial part in the formation of turquoise. Turquoise is found in bulk in the southwestern part of the United States. Turquoise combines with copper sulfide deposits formed near porphyritic intrusive rocks with potassium feldspar.

In some cases of turquoise formations, alunite can come as a distinguished secondary mineral. Alunite is a potassium aluminum sulfate that plays an important part in the formation of turquoise.

The mineralization of turquoise has a limited shallow depth of fewer than 66 feet or 20 meters. However, it can also form deeper fracture places with a higher water table depth.

If the secondary solutions come with high penetration features, turquoise can develop in deeper depths.

Turquoise mostly has cryptocrystalline features with no clear internal structure. You are less likely to find crystals even on a microscopic level.

The shape of turquoise takes the form of filling a fracture or veins, whether botryoidal or nodular. Turquoise can replace certain rocks during its formation, including —

Odontolite is ivory or fossil bone that is believed to be replaced or changed by turquoise. Similar minerals with a phosphate content like iron phosphate vivianite can also change the properties and shape of odontolite.

The acidic copper solution is known to react with potassium and aluminum minerals present in the host rock.

The deposition takes place at low temperatures, generally ranging from 90 to 195°C. Turquoise deposits are usually widespread in areas like North America and Iran. The color, matrix pattern, origin, and hardness of American turquoise is greatly valued.