Ask any random person why turquoise is so named.  Most will look at you like you are a fool and inform you that turquoise (the gem) is named after turquoise (the color)!  Most individuals seem to believe that the color name came first and was applied to the stone. 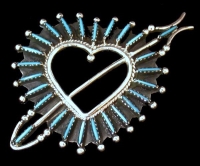 Not so!  Turquoise is a French term meaning Turkish Stone.  It comes from the French phrase pierre turquoise, where “pierre” translates as “stone.”  It was believed, inaccurately, that turquoise came from Turkey.  While much turquoise was traded in Turkey, the items bought and sold probably originated in Iran or the Sinai Peninsula.  The turquoise that first arrived in Europe was probably obtained in Turkish bazaars by Venetian traders.  “Turquoise” is thus a misnomer.

Over time, “turquoise” came to be used to denote a shade of blue exhibited in high quality turquoise.  In fact, if you design websites, browsers such as the one you are using now will recognize “turquoise” as a color command for fonts, background colors, and the like.  If you are a purist, the color code is this: Hex={40,E0,D0}, which produces this color.

Before turquoise became “turquoise,” it was appreciated around the world under other names.  Gubelin (1966) and Pearl (1976) have done a great service by collecting and listing the various name.  Here is a partial list: